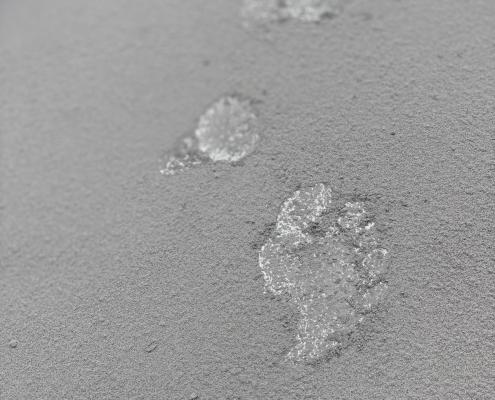 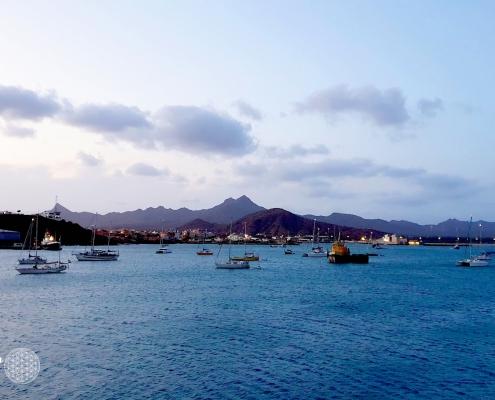 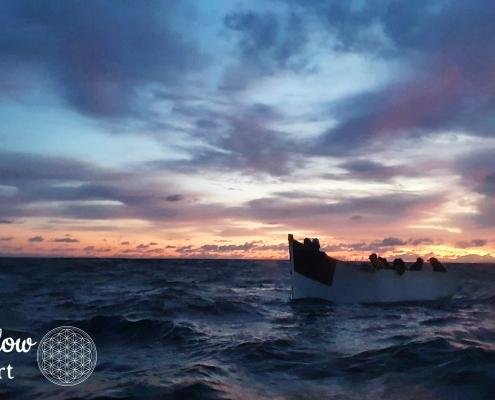 ~ Hitchhiking across the Atlantic as a Nomad Crew Part 1 ~

Wow. While I am writing these lines, I am looking outside onto the nighttime lights of a city down below the mountain in a distance, shimmering in the foreground of the darkness of the vast ocean. Right outside my doorstep a net of an amazing connection of stars spans itself over the garden abundant with all kinds of salad, exotic plants, vines, and palm trees. I saw the sun melting into the clouds over the sea earlier, illuminating a misty shadow of La Gomera, the neighbour island. 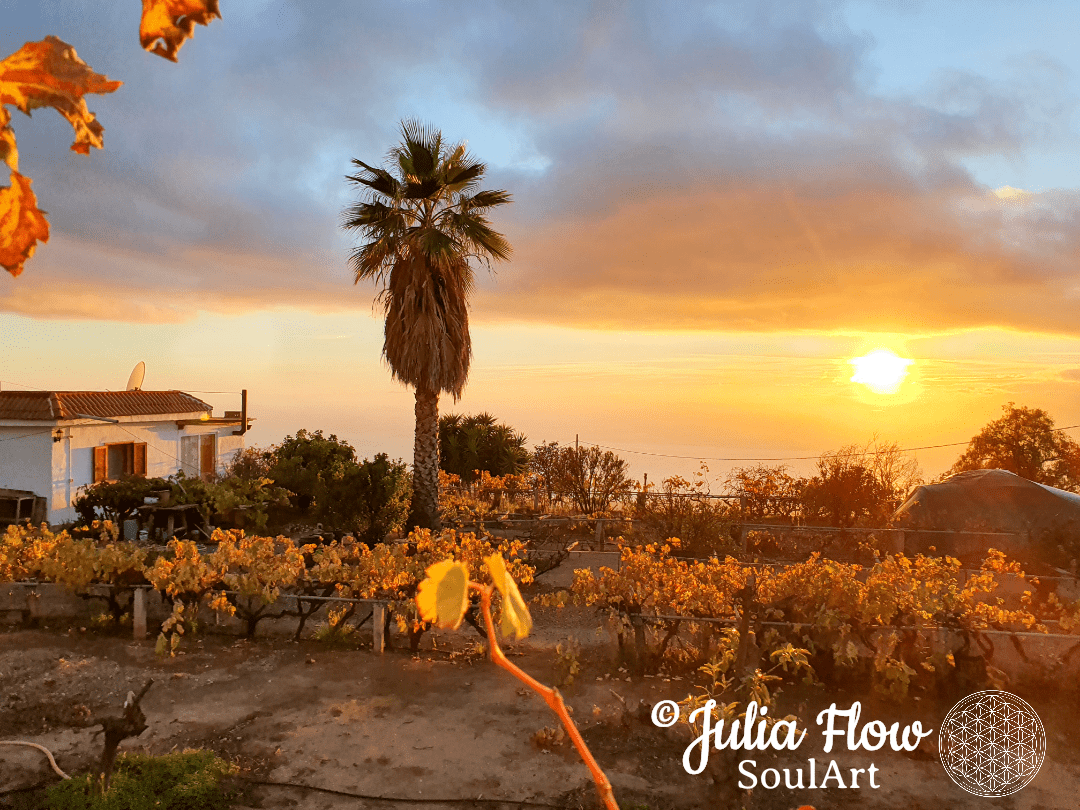 I entered a paradise, yet again. Not because of this scenery, it is because of the people living here. A bunch of beautiful crazy individuals, four Germans and one Australian lady who got stranded here because Australia is in full flue-lockdown still. On my arrival today we had an amazing dinner. Everybody contributed something. It was like coming home really. I feel blessed. I came with no expectation and found all of this right after leaving Pamina with one smiling and one sad eye to say hello to the mountains here.

But let’s starts from the beginning.

I arrived in Tenerife exactly five days ago. On the sailingship Pamina. It was my first sailing trip for several days, and I couldn’t have wished for any better constellation and crew. Pamina’s captain Sönke is bringing her here to Tenerife to get her ready to embark on a two-year journey with his wife, seven year old daughter and dog Charlie (see their website (Klick!) to follow them on their journey). Both ship and captain have everything one can imagine to make it a great trip as far as I can see. 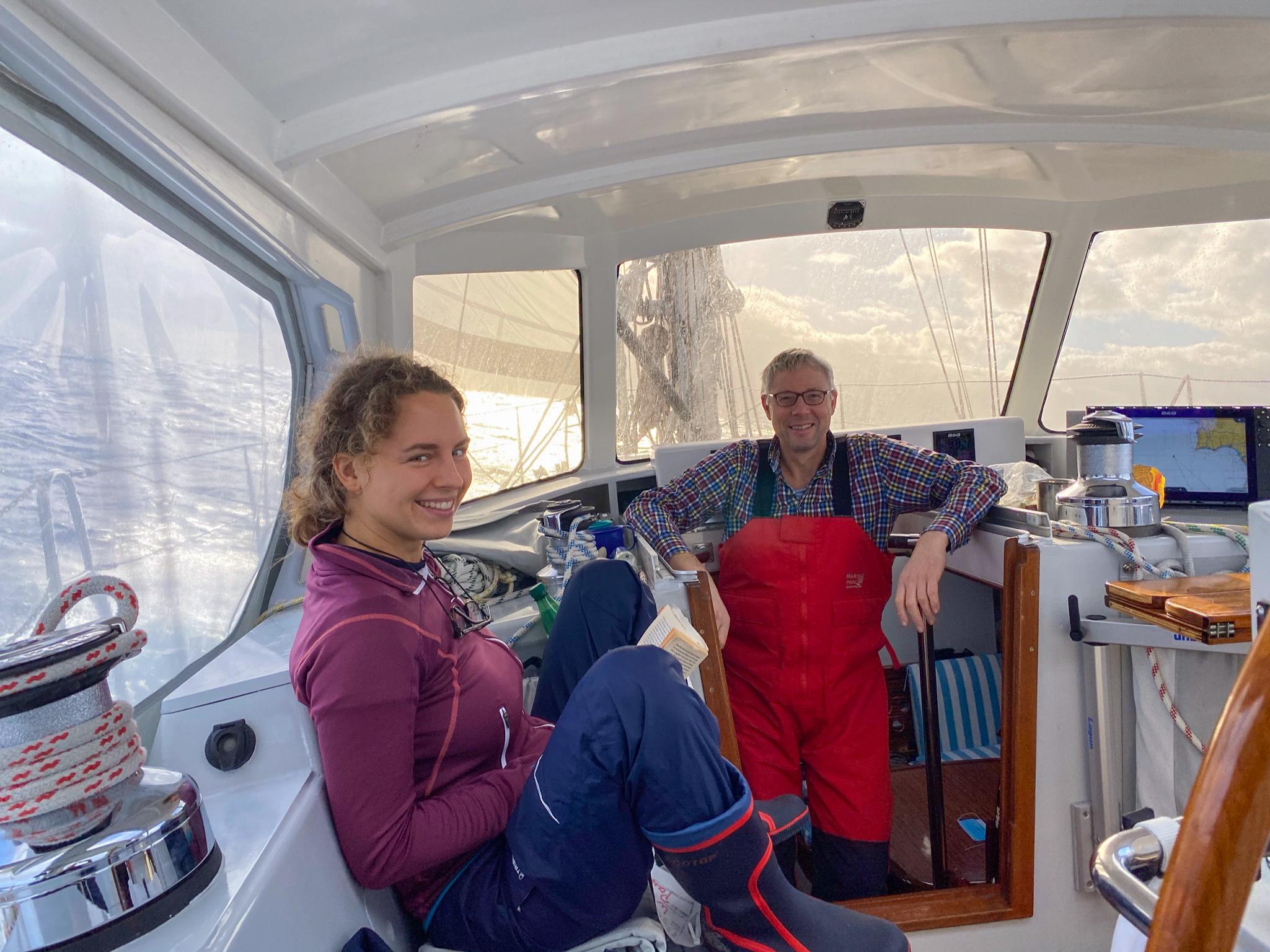 I joined the experienced captain Sönke, his secondhand Hans-Jörg, and Sönke’s work-colleague Martin as the fourth member in Lissabon. It felt funky to speak German everyday after speaking English over the past months during my life in sunny Algarve. What felt even more funky though was to be on this anti-travel sickness drug, a plaster one put’s behind the ear to prevent sea sickenss. Because we were expecting five-meter-waves and everyone of the crew took it, I changed my initial idea to let my body experience and adapt to the new ocean lifestyle in a natural way and also took one. I can say the moment I took this thing off was the moment I started to enjoy sailing and stopped feeling seasick! Also the rest of the crew was feeling unwell the first day and had side effects from the medication. After a time of acclimatisation, the cruise went on smoothly. 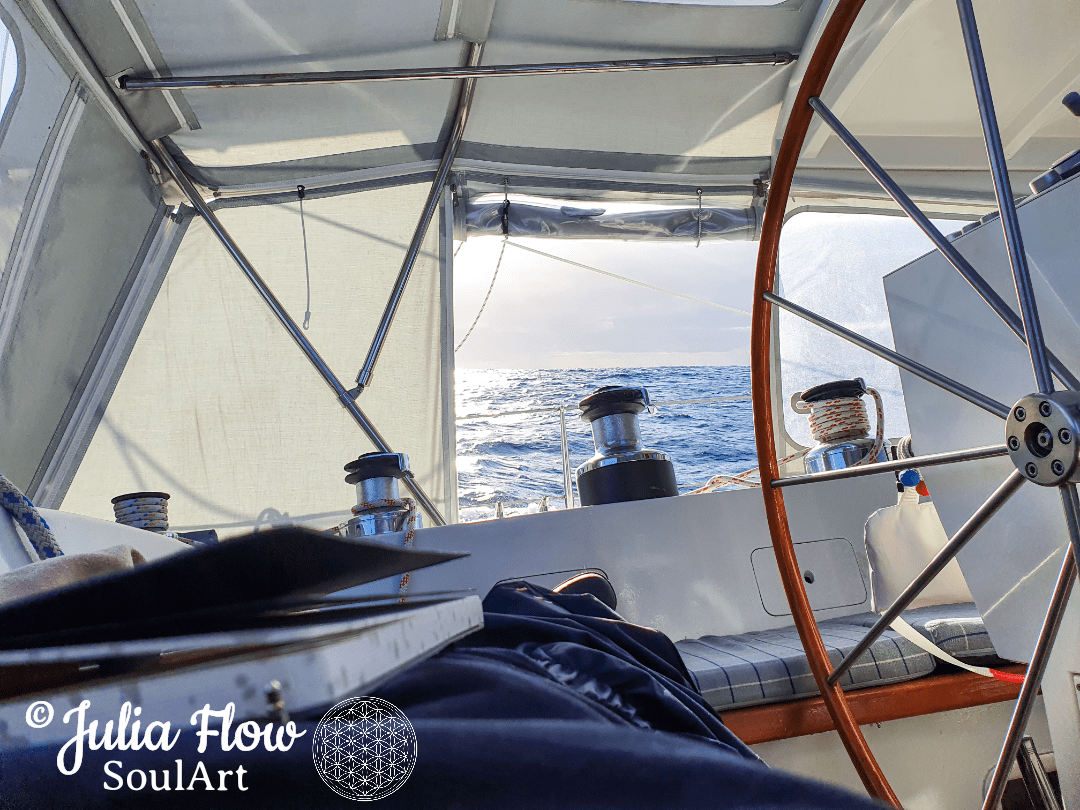 Really though, five-meter-waves aren’t as scary as they may sound to me as a sailing newbie. Surprisingly, I had lost my lack-of-experience-rooted-nervousity of the trip already the moment we left the harbour. Being in the middle of an oc 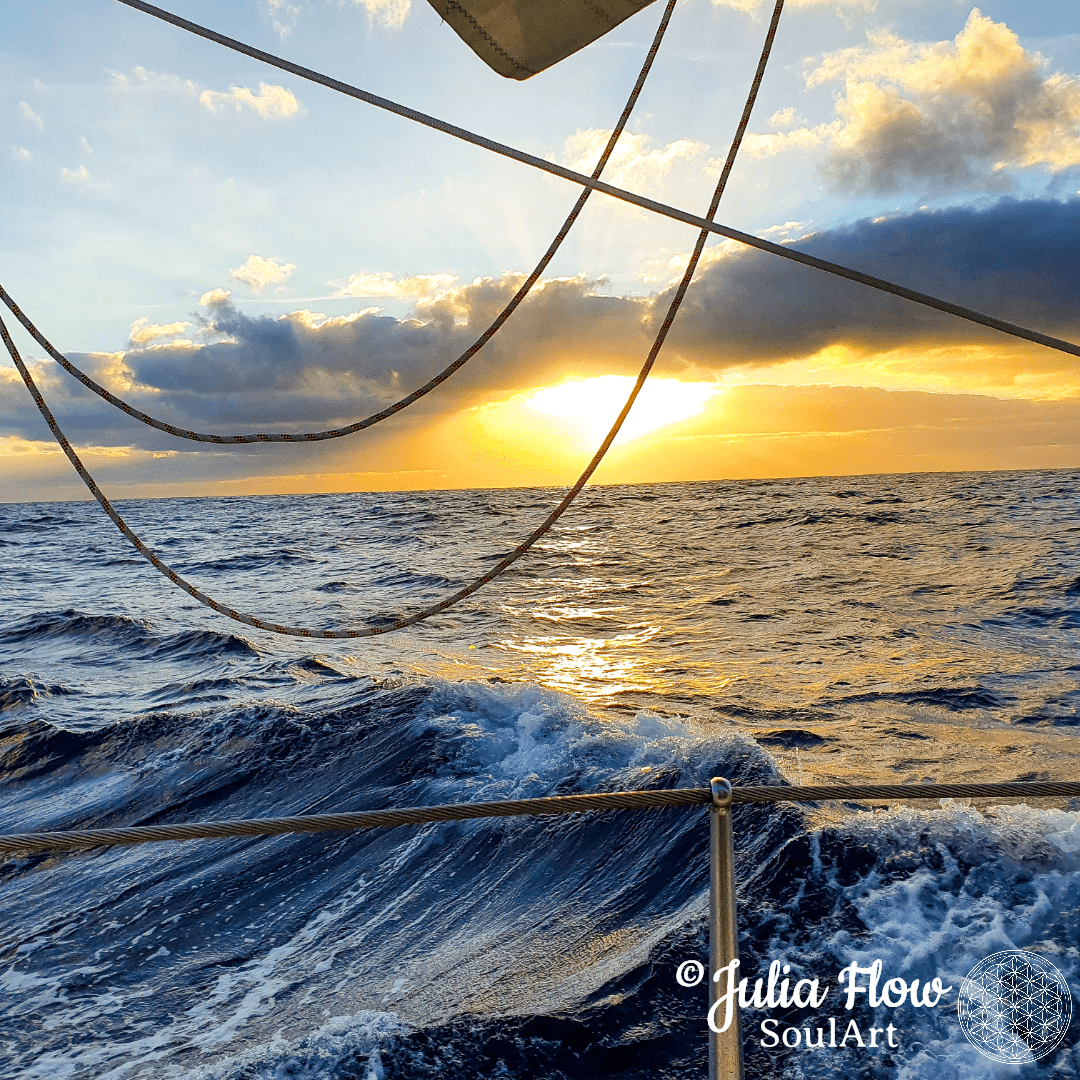 ean on a 16-meter ship can feel like being on a tiny piece of wood surrounded by endless waters. Yet this well-manufactured beauty made her way through the waves as purposeful as an arrow cutting through the air with precise manoeuvring.

I found myself in full trust to the ocean, the ship and to the experienced crew I was bestowed with.

My initial worry of what I might get to eat was not eased but replaced by gourmet dishes coming from a huge stock of Sönke’s grocery shopping. With two huge top loader fridges and a bag full of fruits and veggies we had fresh food in abundance still on arrival, and me being the only vegetarian-almost vegan on-board 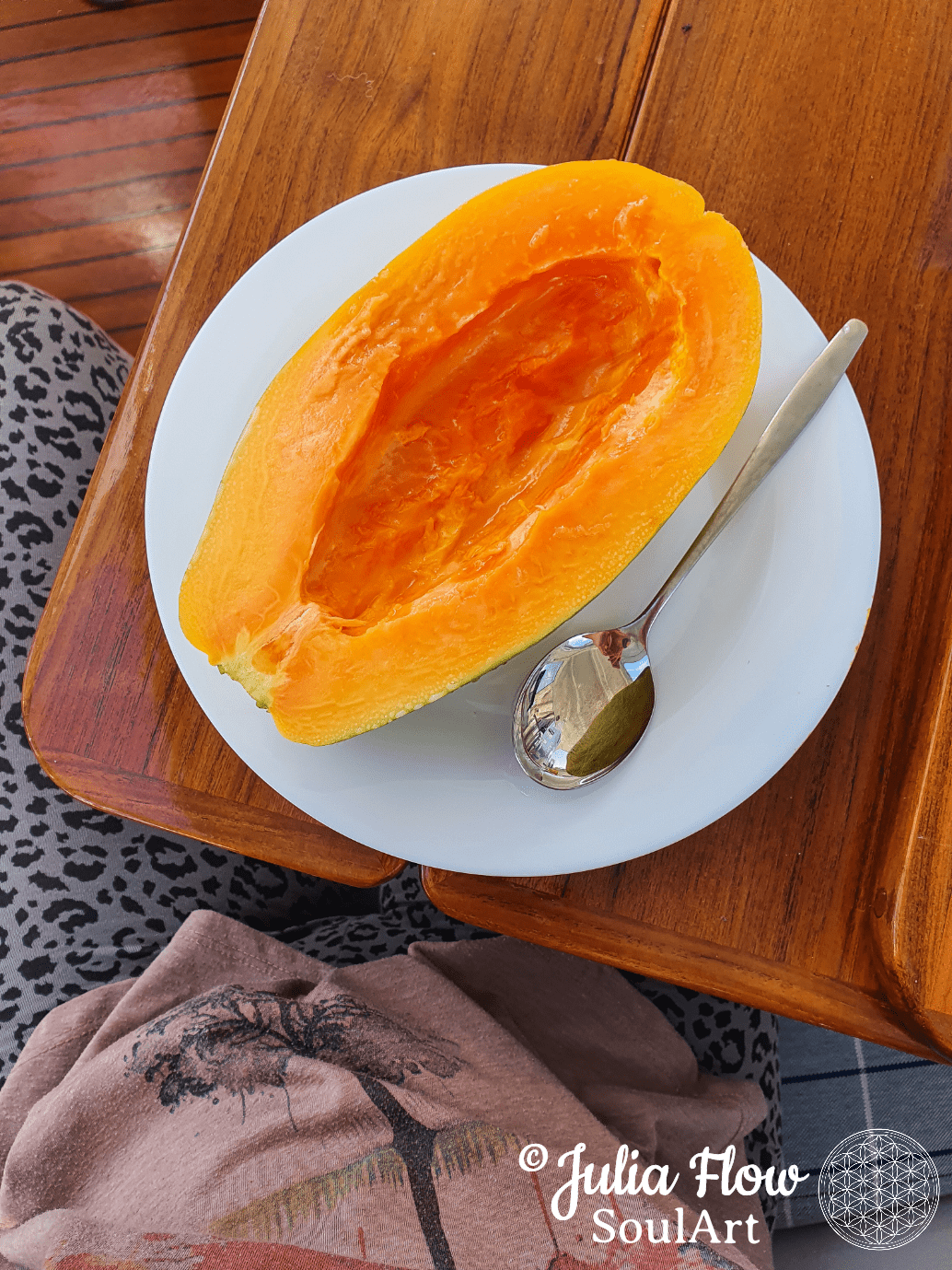 was easily accepted and well-supported.

We made 750 sea miles in five days under perfect weather conditions, with wind of average 8 knots. Apart from passing a few squalls (some sudden bad weather clouds in which the wind comes from all directions and the boat steering requires attention) and minor problems with the navigation system here and there, all had went super smooth. 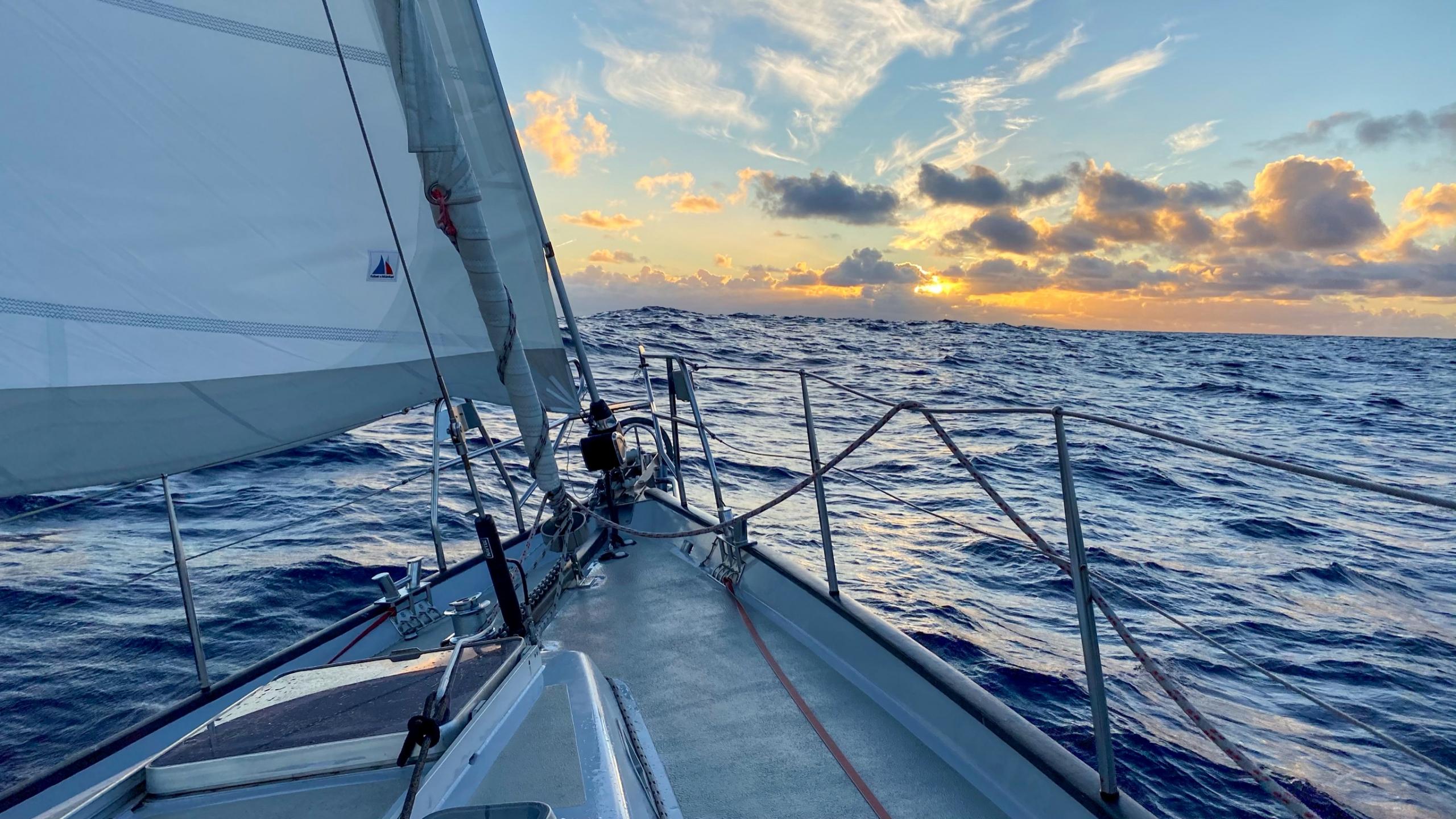 The night shifts were a bit hard for my sleep rhythm to adjust. Four hour shifts from 9pm-1am, 1am-5am, 5am-9am. We were always two people on one shift, so I was never alone, and during the shifts we would take naps in turns. I can say with sureness that I had the most sleeping hours of the

whole crew, still fatigue was in my body. Initially I had gotten a cabin in the bow for myself. The first two nights I was so tired that I just fell asleep right away no matter the condition. The bow is the part of the ship where the waves are felt strongest, hence I couldn’t find a good rest there. The other crew members thankfully let me share their cabin closer to the middle of the body of the ship.

When the waves where high, even there falling asleep could be a challenge while rolling from one side to the other of the narrow bunk bed. Four hours can pass quickly under these conditions. I recall just having found the perfect position, laying on my stomach wedged with my arm on the one side and leg on the other, to finally keep the perfect balance and fall into a soundly sleep – when I was called to begin my shift! I am far from complaining though, the nights shifts had their fancy.

It is an experience, to be surrounded by 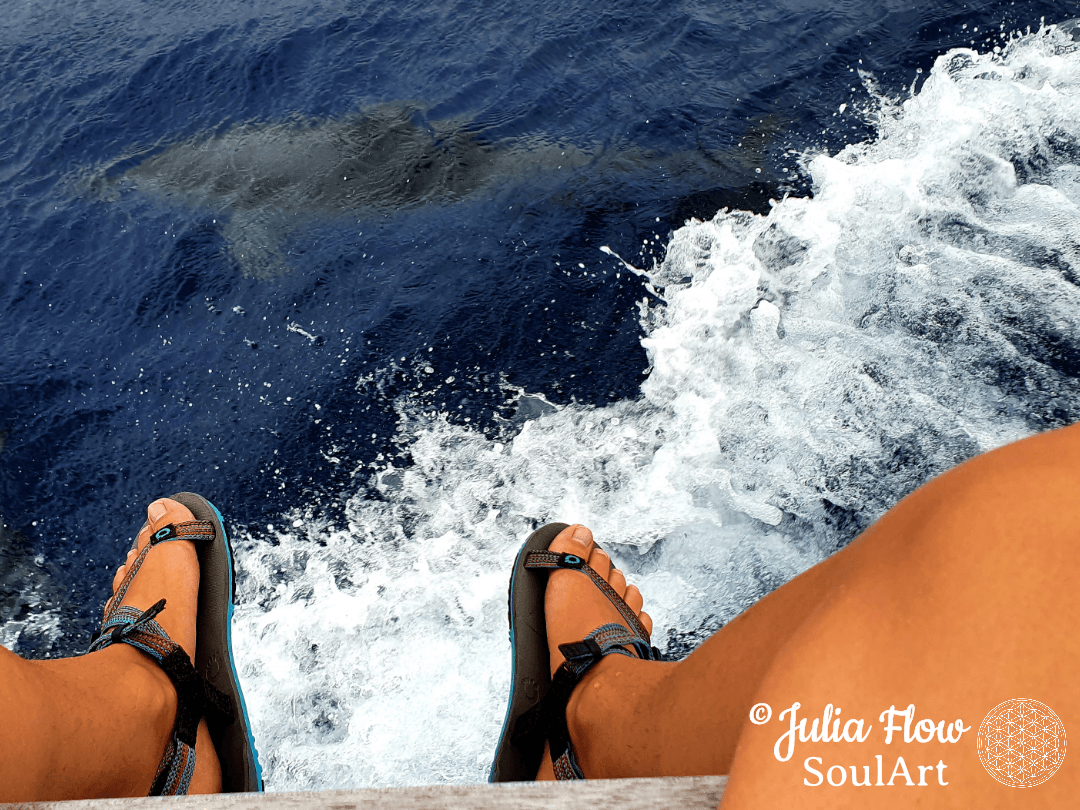 the silence of the night, embraced by a magnificent starry night sky free of air pollution, gently rocked by the sounds of the ship moving through the water. One night I discovered fluorescent algae dancing in the swell at the sides of the ship. Somehow among all the beautiful things I have seen during this journey, the sleepy sunrises over the ocean, the sunsets, the star-covered sky and moon, the clouds in wild formations – these fluorescent algae touched my heart the most. I was imagining stars diving under the surface of the water. And the dolphins that greeted us on our last day are also a magnificent memory!

What an intensive five day and nights. I came onboard with my mind and heart full of experiences waiting to be processed, with a heavy heart, leaving a place where I was loved by beautiful souls. Parting felt like going away from home, setting out once again into the unknown, exposing myself to the power 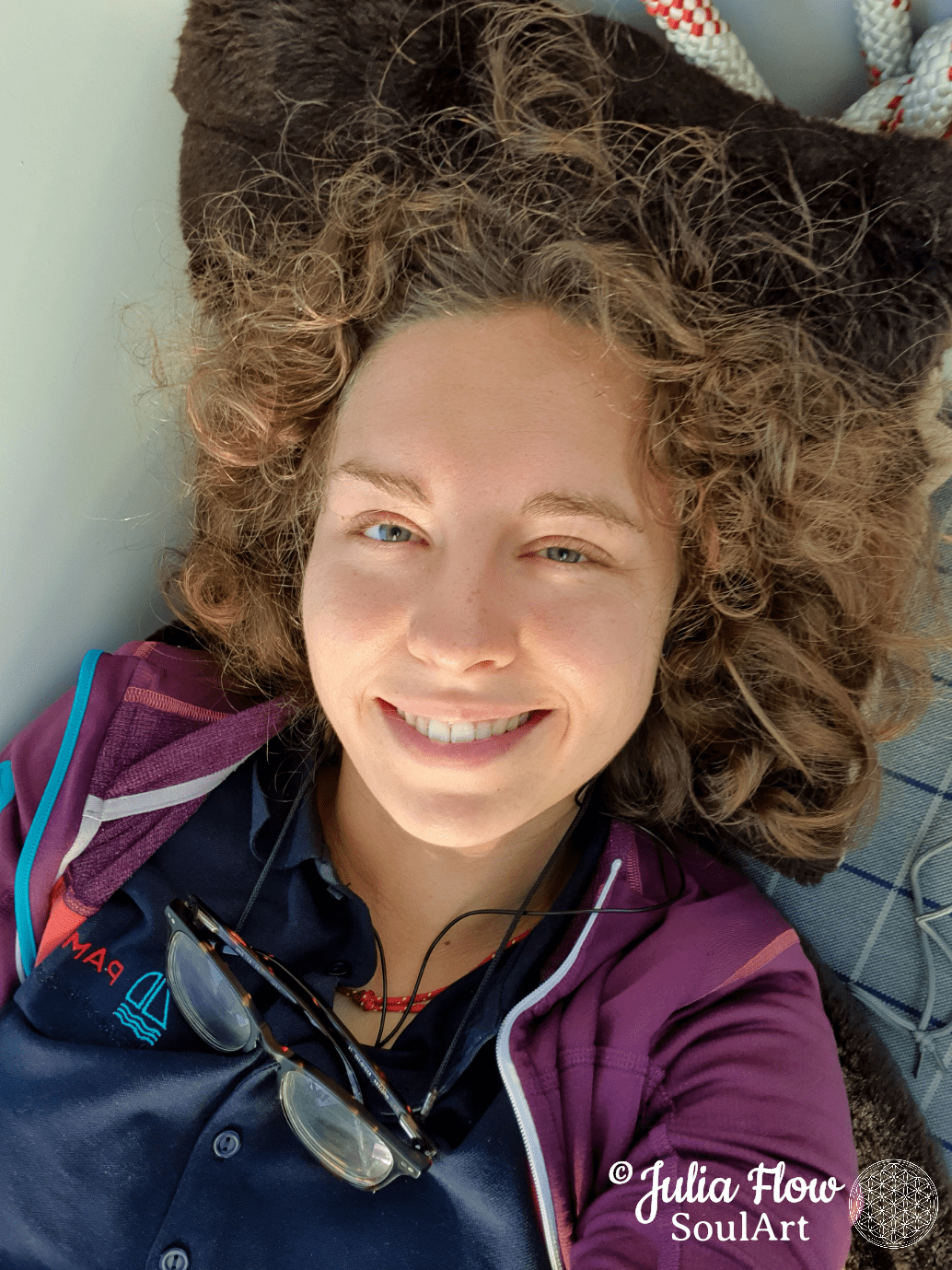 of uncertainty. That is the journey, and one of my learnings thereon. Let go, hit the road, trust, move on, stay open. Listen to the calling.

By Friday, our day of arrival, I feel I was finally in tune with the daily routine with my body well adjusted, and my mind more at ease.

Ready for more and also glad to be able to take a break, enjoy marina life with my adventure companions.

A time to take a walk, ease down, help out with maintenance to honor the ship, decide the next steps and their direction…

Having reached the new shore, it doesn’t feel like I left behind home. It feels like my heart is expanding like a sail pushed by the wind, stretching from here all across the ocean to my beloveds on the other side.

And in the time it is meant to be there is the possibility of reunion.

Leaving out the fact that life gets better and better all the time still, there is pain about the fact that we can’t include the bodies yet when we teleport, just the soul is free. I would teleport myself all around the globe few times a day just to give some heart-hugs to my friends and family. That is the only downside of being on the road so far. That this is not possible.

Not yet. Until then I will make best use of the available transportation systems and enjoy the Canaries and practise sailing! 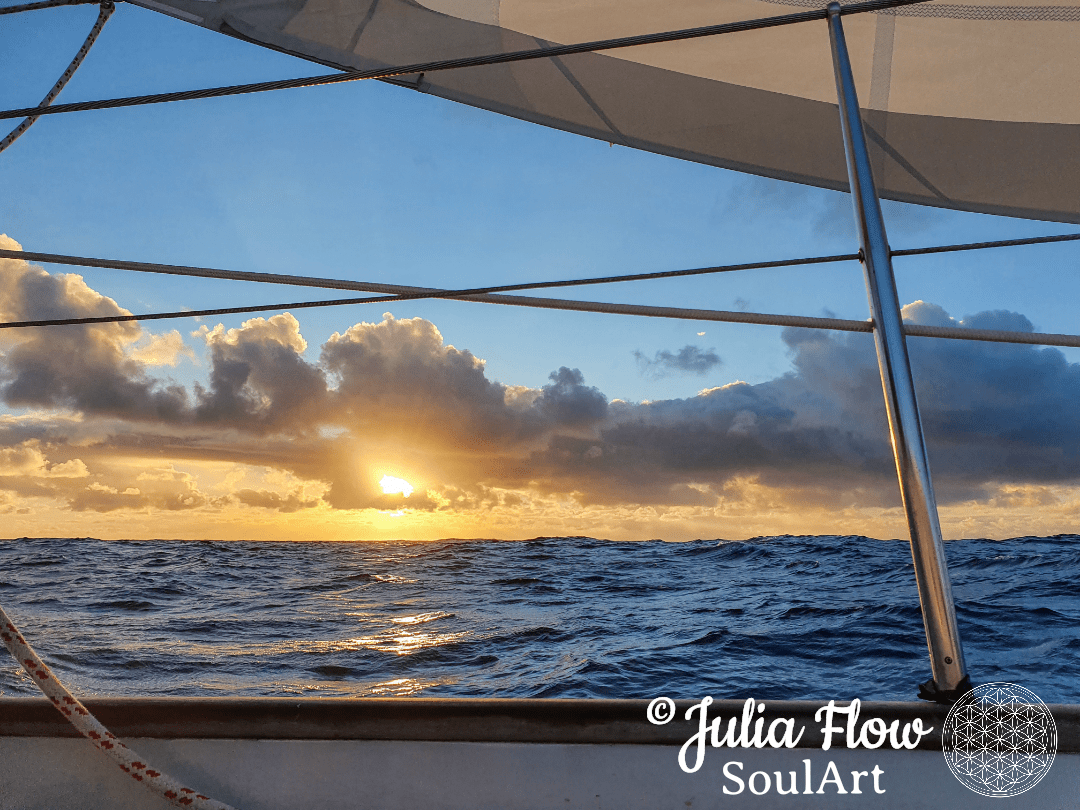 EN
To ensure a high-quality usability with continuous optimization and offer its services this website uses cookies which include tracking technologies of third parties. I agree to this and can adjust the settings as well as revoke or change my consent at any time with effect for the future. AgreeOnly functional necessaryMore about Cookies